On June 15th the South Carolina State Firefighters’ Association, at their 112th Annual Conference in Myrtle Beach, inducted Dr. Henry P. “Mutt” Bozard into the S. C. Firefighters’ Hall of Fame.  This honor is given each year to individuals who are of the highest quality and clearly worthy of recognition at the State level.  Paramount to the selection for this award are the nominee’s contributions to the fire service beyond the local level. The individual must have clearly left their mark on South Carolina’s Fire Service.  Additionally, the award recipient must be recognizable by his or her peers at a State, Regional or National level for actually participating in the improvement of South Carolina’s Fire Service.

“Mutt” graduated from Manning High School and pursued a Bachelor’s Degree from Wofford College in Spartanburg.  After graduation, Dr. Bozard enrolled at the University of Virginia Medical College and entered into the dental program where he received his Doctor’s Degree in Dental Medicine.  He returned to his hometown of Manning where he began a long practice in dentistry.

“Dr. Bozard never misses a department training class or officers’ training”, said Chief Frances Richbourg.  He is active in the Pee Dee Firefighters’ Association and the S. C. State Firefighters’ Association.  He is faithful in his participation at the State’s Quarterly meetings and training programs as well as other specialized training offered around the State and Nation through his affiliation with the National Volunteer Fire Council.  He currently serves as a Director with the NVFC representing the State of South Carolina.”

According to retired County Fire Chief Carter Jones, “Dr. Bozard never intended on becoming a volunteer firefighter, but his curiosity and interest in the work of the fire department caused me to invite him to join as an active member.  After talking it over with his wife, Lynne, and giving special consideration to his dental practice, he decided to join our organization.  Immediately he fell in love with his role as a volunteer and never looked back.”

Jones further commented, “Mutt” became one of our most active and enthusiastic volunteers…always seeking to learn the skills of firefighting and especially the strategy and tactics behind the job.  He grew in his volunteer role and later emerged as an excellent and very competent fire officer who manifested superior command presence.  Never has there been a more effective mentor to younger firefighters.”

Chief Richbourg brags on Dr. Bozard’s involvement, “he has always shown special interest in statewide issues affecting South Carolina’s Fire Service.  He has become a significant advocate for the fire service in legislative matters and was appointed to serve on the Association’s Legislative Committee.  Additionally, he has served on the Health & Safety Committee where he worked on firefighter cancer issues.  He served on various assignments with the National Volunteer Fire Council, ie. Legislative Committee, Audit Committee, and the Advocacy Committee.  In 2007, “Mutt” was inducted into the Clarendon County Fire Department’s Hall of Fame.”

Jay Bruner, also a Battalion Chief with the department, says, ““Mutt” is active in his community…a Board Member of the Bank of Clarendon, supporter of cancer awareness issues, active member of the The Manning Methodist Church, member of the Mustang Club, etc.  He is an adventurer who enjoys traveling with his wife and taking “road trips” to unusual spots of interest…always stopping by local fire stations for tours.  He is a polished amateur photographer whose famous photograph of the Macedonia Church Fire appeared on the front page of PARADE Magazine and helped to dismantle the Klu Klux Klan in South Carolina back in the 90s.”

Throughout the nearly 40 years of service to the Clarendon County Fire Department, “Mutt” has endeared himself to the officers and members of the department and throughout the State and Nation.  Former Chief Jones says, “he is a man of impeccable character and integrity.  Also, he is a man who is at home with “Kings or with Paupers” and is generous to a fault.  No one will ever know the munificence he has shown to friends and strangers alike.  Christian principled, Dr. Bozard is often sought out for his wise counsel or advice and seeks to demonstrate his love for Christ through service to others.”

Dr. Bozard and his wife, Lynne, dearly appreciate the camaraderie of the fire service, and together they have become an advocacy team for all who bear the badge of a firefighter.

In a recent statement, Dr. Bozard thanked the Award’s Committee for selecting him for this high honor, and commented that it is with a humble heart that he accepts the award 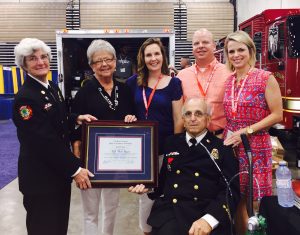 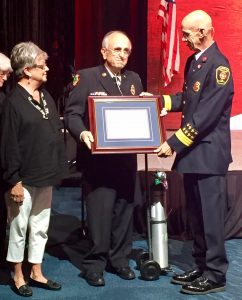 Mutt on stage with his wife, Lynn, receiving the Hall of Fame Award. 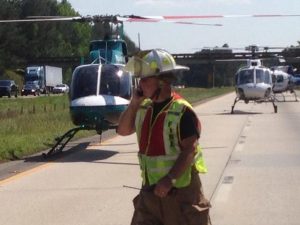 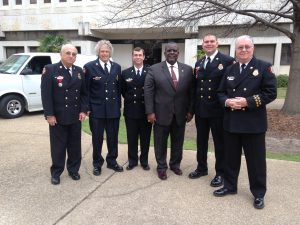